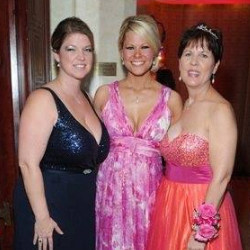 Therese joined us at the 2012 Gala as our Survivor Honoree. Below is her story, as she presented it the evening of November 9, 2012.

Thank you, Cortney and Pink Door for honoring me with the title of Survivor Honoree and allowing me to share my personal journey of surviving breast cancer.

The year 2009 was a difficult year for me.  In the spring, I was recovering from a car accident that left me with a very sore body.  While having my annual well-woman exam, my Gynecologist discovered a new lump and convinced me that I had put-off having my annual mammogram for too long. That was the first year I’d ever skipped my regularly scheduled mammogram.  What a terrible decision that turned out to be!

With my sore body, I wasn’t looking forward to a crushing mammogram; but knew it had to be done.  I had the screening mammogram and suspicious tissue was found in my left breast.  As I had dense breast tissue, this had been the result of many previous mammograms. I wasn’t concerned when the doctor prescribed a diagnostic mammogram and ultra-sound.

Two weeks later, I was relieved that the breast center allowed me to skip the diagnostic mammogram and go straight to the ultra-sound, because the first mammogram was so painful. The ultra-sound revealed a cyst behind the suspicious mass.  Now, I was concerned but not scared.

I wasn’t frightened until I received the phone call that a biopsy was required.  I’d been through this series of tests before, but never made it all the way to the biopsy stage.  Cancer had always been ruled-out before I’d gotten to that level of tests.

Early on the morning of July 6th, the doctor aspirated the cyst and performed a needle biopsy on the tumor.  Then more bad news:  a second mass was found, and another biopsy was needed.  NOW, I was really scared and left that appointment in tears.

I immediately made an appointment with my future Breast Surgeon, Dr. Arlene Ricardo, who is here celebrating with me tonight.  They say that the five stages of grief are the same as being diagnosed with a serious illness.  By the time I saw Dr. Ricardo; I was full-on into the 2nd stage, which is anger.  I was mad and blamed the breast center for not having found the cancerous tumor earlier.  Thank you, Dr. Ricardo for understanding my feelings and being so compassionate.

Even though I had cancer in only one breast, I opted for a double mastectomy because breast cancer was prevalent in both sides of my family.  During the surgery, lymph nodes were removed to determine if the tumor was invasive.  Out of 16 lymph nodes, 5 were found positive for cancer.  Thank God, the cancer had not metastasized further!  With the skilled hands of Dr. Ricardo, I believe I’ve been cancer-free since September 8th, 2009, the date of my surgery.

Immediately following the mastectomy, my Plastic Surgeon started the process of breast reconstruction with tissue expanders.  As the expanders promoted skin growth, I received saline injections to restore my bust to its previous size.  During breast reconstructive mode, I was also receiving chemotherapy treatments.  Once I completed the 4 cycles of chemo at Texas Oncology, I transferred my care to MD Anderson in Sugar Land.  There, Dr. Isadora Arzu (also here tonight) recommended 30 radiation treatments.  I really didn’t want to have radiation 5 days a week for 6 weeks, until I found out that if I didn’t, there was a 40% chance the cancer would return.  That percentage was just too high for me — I had to do it.  I followed Dr. Arzu’s advice and had no skin problems from the treatment, only swelling of the area.

My lymphatic system had been compromised and ironically, radiation promotes lymphedema; so, while I was receiving radiation, I sought out lymphedema prevention treatment, as well.  It was then that I met Tammy Sweed, owner of HOPE Lymphedema Treatment Center, who became my friend and sponsored my table tonight.  Thank you, Tammy, for all you did to heal me inside and out, physically and emotionally.

After the swelling was gone, I had surgery to replace the uncomfortable tissue expanders with softer, silicone implants.  After nipple reconstruction and tattooing of the areolae, I finally felt and looked natural again.  I didn’t care that they were artificial – I was still alive!

After my medical leave of absence expired, I lost my job.  If it hadn’t been for my parents helping me financially, I don’t know where I’d be.  You see, back then, I hadn’t yet heard of Pink Door.  If I had, I promise you, I would have been knocking (pun intended).

We’ve probably all heard the statistic, especially during October, that 1 in 8 women will be diagnosed with breast cancer during her lifetime.  However, a more alarming statistic is that 1 in 3 women are at risk for developing some type of cancer over her lifetime.  Pink Door was created to assist these women.

Pink Door’s goal is to “open a door to a whole new way of life for women cancer survivors.”  From programs like “My Pink Wish” Assistance to “Women in Pink” Scholarship to the Women’s Cancer Resource Center, Pink Door is a well-rounded resource for female cancer survivors.

I want to take this moment to publicly thank my family for putting up with me and for all their many forms of support while I was recovering.

I am proud to stand before you tonight and proclaim, “I AM A BREAST CANCER SURVIVOR!”  It’s only been 3 years, so I still find that statement to bring some emotions.

Please open your hearts, be generous and wave your wand to help Pink Door continue their mission to help provide a fairy tale ending for women cancer survivors.