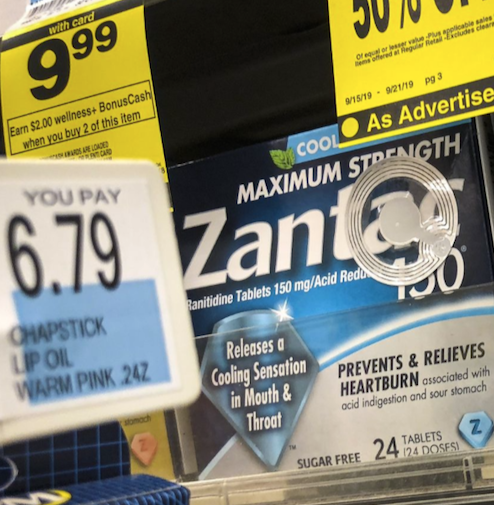 CVS, Walgreens and Rite Aid are pulling Zantac and the generic form of the popular heartburn medication from pharmacy shelves over growing concerns that the products may contain small levels of nitrosodimethylamine (NDMA), a possible cancer-causing chemical linked to liver damage.

CVS said Saturday it was suspending sales “out of an abundance of caution.” A spokesman for Walgreens said Monday that the pharmacy would remove brand name Zantac and generic forms of the drug “while the FDA continues its review of products.” Rite Aid is in the process of removing the drugs from its shelves, the company said in a statement.
“Rite Aid takes customer safety very seriously,” the statement said.

The decision by the pharmacy giants adds to a flurry of worldwide concern about the drug. Major manufacturers of the generic form, ranitidine, have announced recalls, and other countries have requested that companies halt distribution of the drug or issued recalls. The U.S. Food and Drug Administration has been investigating the possible risk to patients, as well.