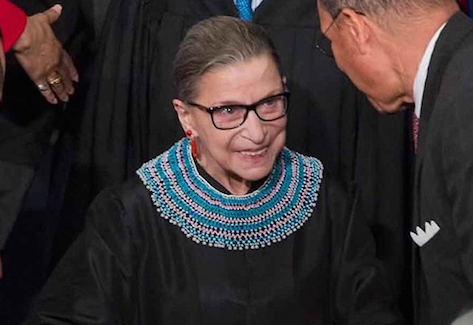 Supreme Court Associate Justice Ruth Bader Ginsburg, who died last week at the age of 87, is rightfully being memorialized as a “feminist icon,” a “history-making jurist,” and as “Notorious RBG,” a pop culture legend. One more huzzah should be added to the list: cancer survivor.

Ginsburg was first diagnosed with colon cancer two decades ago, and over a period of more than 20 years beat it back. She also had bouts with pancreatic and lung cancer. It actually wasn’t that long ago that people diagnosed with cancer — people like Ginsburg, me, and the more than 16 million Americans currently living with cancer — were called “cancer victims.” We were expected to hide in shame, and too often faced discrimination in the workplace and, of course, by health insurers who viewed us as either too risky or too expensive to provide coverage.

Ruth Bader Ginsburg proved to be as much of a trailblazer for people living with cancer as she did for women, minorities, and free speech, among the many hot-button causes and cases she heard during her quarter-century on the high court.

“RBG encompasses the true definition of a cancer survivor,” Dr. Anne Blaes, director, Cancer Survivorship Services and Translational Research, Masonic Cancer Center at the University of Minnesota, emphasized to me this week. “From the time of her diagnosis, she continued to live with her cancer, rarely missing a day of work. She bravely went through multiple surgeries, hospitalizations, and treatments over the course of two decades. She continued to live and work on the bench during that time.”