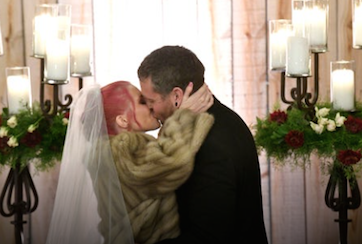 After meeting online, Nashville’s Amanda DiMarzio told Sean Woodard she had two years to live — but he started dating her anyway, and the two got hitched (for free!) Wednesday night.

After a tough divorce, single dad Sean Woodard decided to get on the Bumble dating app, the one where women make the first move.

Soon, the Smyrna construction worker had a match, “Amanda,” who had posted several silly pics of herself on her profile page.

Turned out Amanda DiMarzio also was a recently divorced parent. One with a wacky, sarcastic sense of humor.

In their first online exchange, she asked him what his death row final meal would be. His answer: Anything with Reese’s.

They went back and forth several times, exchanging playful, smart-alecky messages and talking on the phone before they set up their first date.

Beforehand, DiMarzio asked to have one more phone conversation with the man with piercing blue eyes and sweet pics of himself with his kids.

“So what are your thoughts on cancer?” she asked.

Woodard, stunned, paused for a second: “Are you telling me you have cancer?”

DiMarzio laid it all out. Eight tumors. Cancer in her lymph nodes and bones. About 40 pills and one to three injections a day to survive. Sometimes, DiMarzio spent the entire day in bed.

Her prognosis: A 10% chance of surviving longer than five years.

OK, he said. Where are we going on this date of ours?