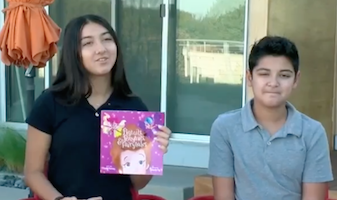 A teen in San Diego has written a children’s book, which she hopes can help in the fight against cancer.

Sophia Namazy, 14, wrote “Pigtails, Ponytails, and Fairytales” after seeing her little sister wake up every morning with messy hair. In the book, a pair of fairies come at night and play with it. Sophia says it’s loosely based on her sister, Poppy.

Now that it’s published, she’s decided to donate all the money from sales to the Dana Farber Cancer Institute in Boston.

Namazy picked that location because it’s where her twin brother, Max, goes every year for treatment.

The book is available on Amazon.