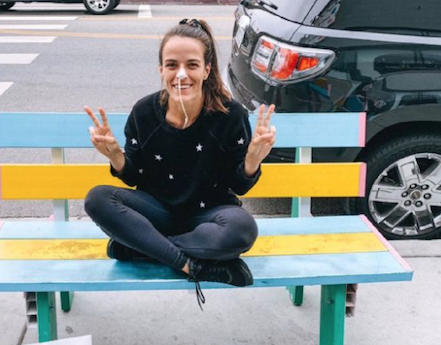 Nicole Gibbs is a 26-year-old professional tennis player, currently ranked No. 137 in the world and playing for the Orange County Breakers of World TeamTennis. The former NCAA singles and doubles champion was diagnosed with cancer in the spring after a routine dentist appointment. She shared her story with us amid her comeback to the court.

Shortly before Caroline Wozniacki’s bachelorette party festivities in April, I received a promotional email for a free teeth-whitening from my new dentist. “Oh, sweet!” I remember thinking. Naturally, I wanted to look good for the weekend (knowing how much of it was going to end up on Instagram and all), and for at least two years I was slacking on getting a regular cleaning.

So I went. And it changed everything.

It was my first time seeing this dentist, and he instantly noticed a small growth on the roof of my mouth. I mentioned this to my primary doctor at least five years ago; she told me it was nothing to worry about, a common bone growth that didn’t seem to be growing rapidly or doing anything of concern. My dentist at the time felt the same. It was about a centimeter in diameter and not causing me any pain or discomfort. However, my new dentist felt differently — the growth set off major alarm bells for him, and he encouraged me to get it biopsied. He felt certain it was not a bone growth.

I went to an oral surgeon the very next day. He thought it would be benign, based on its history, how long it had been in my mouth and how slowly it was growing. But the biopsied sample was sent to a pathology lab for an official diagnosis. I then, happy to at least not have that hanging over my head, went to the Bahamas to celebrate Wozniacki.

Shortly after getting back home, about a week after the initial dentist appointment, I got the call with the results.

As soon as the doctor said the word, I glazed over. I didn’t hear much else, but I am pretty sure I cracked an awkward joke. It wasn’t until I called my fiancé, Jack Brody, that it really hit me. I started to fall apart and panic. It felt like my biggest fear come true. Since a very young age, I had been terrified about getting cancer. I almost started to question myself, like, had I manifested this with my anxiety about it? Did I bring this upon myself somehow by being so concerned about it?

Then my thoughts went to the tennis court. Would I ever be able to play again?

I made the mistake of going to WebMD and doing a Google search for oral cancer because I didn’t have any more specifics at that point, and the first thing that popped up was “17 percent five-year survival rate.” I thought, “Oh cool, I’m going to die.” It was terrifying, but I thankfully discovered soon after I had mucoepidermoid carcinoma, which is more of a subset and much less scary. I didn’t let myself play internet doctor after that and told Jack he was the only one allowed to Google anything from that point forward.