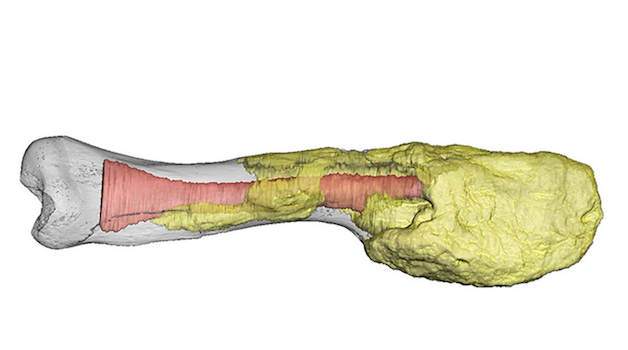 This deformed bone is the first clear example of a malignant tumor diagnosed in a dinosaur. The partial fibula—a bone from the lower leg—belonged to a horned, plant-eating Centrosaurus that lived roughly 76 million years ago in what is now Dinosaur Park in southern Alberta in Canada.

Paleontologists initially thought the bone’s strange shape was due to a fracture that hadn’t healed cleanly. But a new study, published today in The Lancet Oncology, compares the internal structure of the fossil (above) with a bone tumor from a human patient to seek a diagnosis. The conclusion: The dinosaur suffered from osteosarcoma, a cancer that, in humans, primarily attacks teens and young adults. The disease causes tumors of immature bone tissue, frequently in the long bones of the leg.

The researchers say their diagnosis shows a more careful look at unusual fossil malformations using modern imaging and diagnostic techniques can pay off, leading to new insights about the evolutionary origins of diseases.