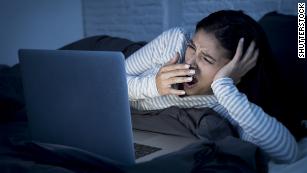 Sleep traits could be a risk factor for breast cancer, new research suggests. Women who said they preferred to get out of bed early were found to have a lower risk of breast cancer than those who stay up late.

However, experts cautioned that other breast cancer risk factors such as alcohol consumption and being overweight have a greater impact than sleep and said there was no reason to change your sleep patterns.
One out of 100 women who considered themselves morning people developed breast cancer, compared with two in 100 women who described themselves as evening people, according to the study, which was published Wednesday in the BMJ.
The study also found that sleeping more than the average seven to eight hours per night was found to have a slightly increased risk of breast cancer. It also found there was little link with insomnia.
Researchers used information from more than 400,000 women in two large data banks — around 180,000 women from UK Biobank study and more than 220,000 women from the Breast Cancer Association Consortium study. Participants’ preference for waking early or late was included in the data.